BeamNG.drive offers a highly customizable and extremely flexible User Interface that can adapt to anybody’s preference.

The UI Layout is composed by various Apps, each with its own scope (ie. Tachometer, Messages, etc.). The game comes with a number of UI Apps with various scopes.

The layout can be edited while using the Freeroam game mode: Apps can be moved, resized, removed and added from the Apps library.

Press ESC to open the sidebar menu while in Freeroam game mode, then click the Customize UI Apps button to enter the UI Edit mode. 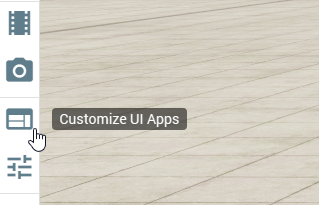 In this mode, Apps can be moved, resized and also removed from your layout.

The Hide in cockpit checkbox will prevent the app from being visible when using the Driver camera mode.

While in UI Edit mode, 3 buttons will appear in the center of the screen:

Click the Add App button that shows in the center of the screen, while in UI Edit mode. This will open the Apps menu from where all available apps are listed.

Click on any app to add it to your layout.

It is not possible to add an app if it already exists in your layout, only one instance is permitted