Replay is a great way to capture and rewatch memorable gameplay moments.

These are not video files!

The default recording controls are:

Binding
Action
Comments
Binding
ALT + R
Action
Start/Stop Recording
Comments
Stopping a recording will automatically save it
Binding
ALT + Shift + R
Action
Cancel Recording
Comments
Stops and does not save the recording
The smoothness of the replay depends on the framerate when it was recorded. Higher framerates will result is a smoother and less jittery recording.
You can record a replay in slowmotion to balance out performance issues.

You can load and rewatch your replays from the Replay menu found in the sidebar: 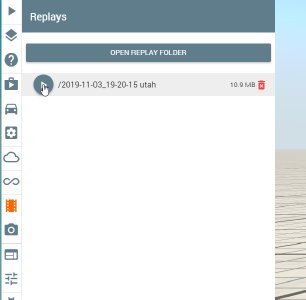 The default playback controls are:

To quit a playback, open the Replay menu and click the Stop icon on the currently active replay.

Bindings can be fully customized under from the Controls → Bindings menu, under the Replay category.

A recording could not playback correctly anymore if the vehicle(s) received changes of any kind between when the replay was recorded and its playback (e.g. mod for that vehicle being installed/removed, game updates, etc..)

Replay recordings may not be compatible between different game versions!

Replay can also be accessed and controlled through the companion UI App .

Below is our official video preview for this feature. In the video is shown the usage of the Replay feature only through its UI App

Learn how to combine Replays and Advanced Camera Controls at the Path Camera Guide article.