This feature has been introduced with version 0.20, with the purpose of automatically process and convert textures files provided as PNG (Portable Network Graphics) into DDS (DirectDraw Surface) texture files.

The Texture Cooker will only convert 8-bit PNG files that are following the following naming convention: 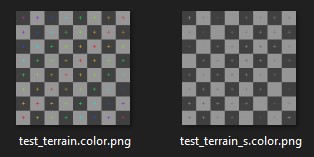 Example of textures that would be converted to BC7 sRGB

The automatic conversion happens as soon the game has to load a texture file that matches the requirements mentioned above.

The conversion time depends on the size of the textures, and the speed of your machine. The game’s performance will temporarily slow down during the conversion.

The converted texture files will always be located inside Userfolder/<gameVersion>/temp, at the same relative location of your original texture file. (Learn more about the userfolder here )

If the original file is at

the converted file will be found in

Place the converted texture files in the same location of the originals, no other changes are required. Even though your materials file will be pointing to the original PNG file, the game will automatically detect the converted DDS files (if exists) and load it instead.

When manually specifying textures in a main.materials.json file (e.g. creating a skin for a vehicle), point to the PNG texture file in the texture path. The game will automatically use the converted DDS texture file if it exists, otherwise it will first proceed to convert the PNG.

PNG specified in the material file, and console message indicating the successful import and conversion to DDS

Always keep an eye on the console to see the status of the conversion process, and eventual errors.